The Jenkins plugin for vRA has been enhanced!   The plugin has matured since it’s inception as part of a hack-a-thon during the holiday’s. See below for a list of enhancements.

VRADEP_BE_NUMBER_NAME : Provides the deployment name where NUMBER is an increment  starting from 1. The number corresponds to the order of deployments specified under the build environment section. 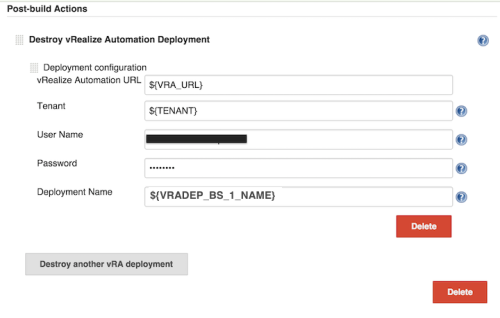 The project page at github has additional information on utilizing the plugin and provides a deeper dive into the environment variables produced by the plugin.

If you have any questions feel free to post them on this blog or hit me on twitter.  If you find any bugs, then please log the bugs on the Jenkins project page.

This entry was posted in Uncategorized. Bookmark the permalink.